I usually sleep well on boats, so on Monday morning I awoke on Ed’s yacht Samphire feeling refreshed. Katherine and Ed had sent details of local physiotherapists. A few phone calls later and I’d arranged an appointment with Swiss Physio in Tyneside for 12.15. Lately, increasing knee pain (and some hip pain) has caused me some concern as I need to stay fit to continue the tour. I’d decided to get an understanding of the cause and of what I needed to do to manage the problem.

Angela at Swiss Physio provided a diagnosis with clear advice on what self treatment was required – mainly a regime of specific exercises but with some other ideas.

I would have liked to stay a little longer and see a bit of Newcastle, but the prospect of a force 3 to 4 westerly wind and ideal conditions for sailing north meant I was away next morning before noon. Before departure, Stewart and Darren had made me welcome aboard their orange-hulled 19 foot yacht, where I shared coffee and croissants. They were planning a quick day sail before returning to work in the evening. We met again in the lock between the marina and the Tyne where I moored alongside their boat while the water level in the lock dropped to that of the river. The westerly wind took me quickly down the Tyne and out past the twin piers of the river entrance. I turned northward and waved goodbye to Darren and Stewart.

The sailing was pleasant enough, but uneventful. I close-reached past the northeast coast, passing a mix of small harbours, towns and industrial areas. Keeping fairly close inshore kept me up wind as ‘insurance’ against the wind veering to the North but also kept me in flat water, where I was able to make better speed. Soon after passing Newbiggin-by-the-Sea, with its distinctive, 14th century parish church on the point. Druridge Bay came into view. I’d wanted to stop here, mainly for the pleasure of being able to get ashore on a wide sandy beach backed by high dunes. Breakers, caused by a swell from the North East, were showing white along the shore. The north end of the bay was more sheltered though, and I put ashore close to a small coble tending a salmon net running out to sea. 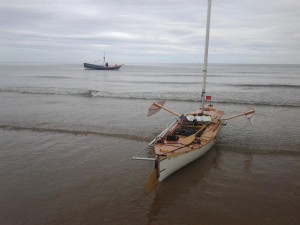 By the time I’d briefly ‘stretched my legs’ (a strange expression in my view: ‘straightened my legs’ after being in a cramped position for several hours would be more accurate), with a short walk on the dunes, Stacey was almost high and dry. Several heaves were needed to drag her back to the water. Carefully avoiding the salmon nets, I pushed off. The fishermen gave me a wave as I passed. The weak breeze soon died, and I paddled towards Hauxley Point. Looking down through the unfamiliar clear green water, I could see rocks, seaweed and limpets as I glided slowly above.

Ahead, an uneven rocky shelf just off the point was starting to show above the water. I had intended to sail out to the east, passing seaward of the reefs, but now instead, with all the navigational insouciance of a kayaker or canoeist in calm conditions, I simply picked a path through the middle. The westerly breeze revived and I carried on under sail, spilling wind and slowly moving forward whilst standing up for a clearer view of any rocks near the surface.

Coquet Island, with a small beach and white lighthouse atop a grassy mound, was on my right as I neared the entrance to Amble harbour. Once inside the entrance (formed by twin piers), some hefty paddle-sailing against wind and tide was needed to reach Coquet Yacht Club (about a quarter of a mile upriver). Phil Derry (Vice Commodore of the yacht club) arrived especially to meet me and to give me access to the clubhouse facilities.

Feeling tired after about six hours’ sailing, it took me over an hour to unload the boat, carry my gear to the clubhouse and then drag Stacey up the steep slipway. But I was very grateful to Coquet Yacht Club for providing me with somewhere to stay. With the wind whistling through rigging and clattering halyards tonight, whilst rain batters against the windows, I was glad to be sleeping on the club room floor rather than in a tent.