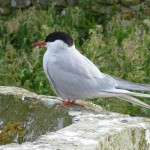 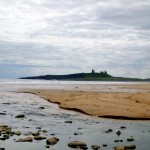 Dunstanburgh Castle From the North 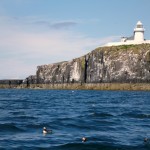 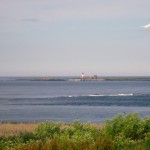 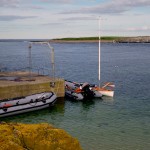 Stacey and the Ribs 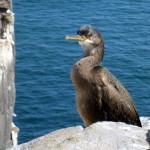 Saturday dawned sunny with a promise of a real summer day. I took a breakfast of cereal and toast alone at the B&B, before anyone else was about, and departed for Coquet Yacht Club, carrying two drybags over my shoulder. After loading up and rigging the boat in the sun I pushed off. A light wind barely disturbed the surface of the water, but the ebb tide carried me steadily down the River Coquet past moored yachts, small motor cruisers and the marina. Passing the high harbour wall and the fishing boats tied alongside, I looked toward the harbour entrance. Unlike previous days, the breakers, formed as the ebb tide swept out into the calm North Sea, were small and posed no threat. Sailing gently northward, about half a mile offshore with a gentle breeze from the south west, I watched the panorama of wide sandy beaches, sand dunes, green fields and the grey blue outline of the Cheviots slowly drift by. Wide bays alternated with rocky stretches of coast and headlands. As I passed Craster’s small harbour, the dark outline of the ruins of Dunstanburgh Castle came closer. The hillside under the castle was covered with many small dome shaped white tents pitched there as part of an art installation project to celebrate the Olympics. I’d looked at some details two days before when I was in Craster. The event was described as a ‘Peace Camp’ and live event, but camping was not permitted and all the performances were recorded. I expect celebrations and camps were more lively affairs in the castle’s 14th century heyday.

Around midday, I could see the Farne Islands clearly. The tide, which had been carrying north, began to slacken. The wind became slight. Keen to reach Inner Farne before the tide turned, I paddle sailed. Gradually, the outline of Inner Farne, with its white lighthouse, increased in size. Puffins floated on the water. Their small wings seem inadequate for flying, but as I approached they launched themselves away from me across the waves, and after much frantic pattering across the water and whirring of wings, they took flight with their large orange Puffin feet trailing behind. Sooner than I’d expected, the tide started to run south. I was just able to reach the shelter of a small area of water known as ‘The Kettle’ (between Inner Farne and two nearby smaller islands) before I was swept back southward.*

The Farne Islands are a nature reserve owned by the National Trust. Landing, particularly during the breeding season for seabirds, is restricted, with all of the Farne Islands except Inner Farne currently out of bounds. Also, it wasn’t possible for me to pull Stacey ashore on the only small sandy beach as Arctic terns were nesting on the sand. Fortunately, two resident wardens had seen my arrival and kindly arranged for me to tie up alongside their RIB (stands for ‘rigid inflatable boat’) next to the small harbour wall. Small converted fishing boats from Seahouses arrived every half hour or so with visiting tourists and bird watchers to spend an hour or two walking around the designated pathways for views of the resident Arctic Terns, Common Terns, Shags, Puffins, Guillemots, Kittiwakes and other seabirds. The Arctic Terns seemed particularly unafraid of the visitors, making it possible to get very close before they flew off with scolding cries. I was glad of my Tilley Hat as Terns would occasionally shoo humans away from their nests by dive-bombing and pecking their heads. Puffins scurried about in the undergrowth, disappearing into and reappearing from their burrows. All around, the raucous cries of hundreds of seabirds filled the air.

The next tide running North was due about five hours after my arrival. This gave me plenty of time to relax on the small green next to the lighthouse, and to look out over the small sunlit archipelago stretching out to sea, with the large red and white lighthouse on Longstone in the distance. I talked to some of the wardens for a while. Some of the wardens live on the Farne Islands from March through to November, with one day off a week, and much of their time is spent doing wildlife surveys and looking after visitors. On a sunny July day, Inner Farne seemed an idyllic place but I could imagine how wild and isolated the island was during cold, wet and stormy weather, when the sea is sometimes too rough to launch a boat. I was reluctant to leave and asked the head warden whether it might be possible to stay overnight. After a phone call to his boss the answer was ‘yes’ but on thinking through the practicalities of where to ‘park’ Stacey when the ribs were on the pier for the night we couldn’t come up with a simple solution, so with regret I departed for Lindisfarne around 6 pm.

Carefully steering to the west of Swedman Buoy to avoid the hazards of the Megstones rocks, I paddle-sailed in a light wind towards Lindisfarne. The entrance to the harbour is somewhat tricky, but I managed to line up the brick built leading marks on the Old Law peninsula and found the Triton starboard hand buoy where I turned to Starboard and towards the harbour. In the increasing gloom of a cold and cloudy evening, I began to encounter a very strong ebb tide running out the harbour and struggled to make way against it in the light wind. Some frantic paddling was required and at one stage I had to resort to jumping out the boat in shallow water to tow the boat against the fast flowing water. To add to my discomfort I discovered I’d previously forgotten to close the waterproof zipped ‘fly’ in my drysuit. Cold seawater flowed in and down my legs. I cursed. Paddling into the small harbour where the receding tide was exposing areas of mud, I had a strong suspicion that camping on Lindisfarne is banned so I was resigned to a rather cramped night sleeping on the boat under a tarpaulin. A guy on a moored yacht called Northern Soul confirmed I was correct about the ‘no camping’ rule but sensing my lack of enthusiasm for sleeping on board Stacey whilst parked on the mud, he offered to put me up for the night. After tying Stacey up to his dinghy and transferring bags to the yacht, we pooled our food and drink and passed an enjoyable evening drinking an eclectic variety of drinks and mixers whilst discussing my canoe sailing journey and his previous career as a big band roadie. I suspect Steve was better company than me. Tired after the exertions of the day I began to flag and then started to nod off before eventually crawling into the forward cabin and falling asleep, just as the rain started to drum on the deck above me.

* The tidal streams near the Farne Islands run much stronger than those on the rest of the Northumbrian coast and are renowned for being difficult to predict accurately.

← Paused at Amble…
Lindisfarne to Berwick in a Strong Wind… →