My stay at Rye Harbour due to strong winds could not have been better.  A great B&B, with great hosts, a chance to spend time with Katherine, walks on the beach and a meal out to celebrate my birthday.  I didn’t want to leave.  Especially as I wouldn’t see Katherine for two weeks.

On Sunday, Ian arrived to sail with me for the day.  As usual he was ready to go exactly on time and champing at the bit and I was still hurriedly shoving camping and sailing gear into every possible compartment in the boat.  After a hurried launch I chased Ian down the half mile narrow channel to the sea where I could see the distant triangle of his sail sometimes half disappearing behind large waves.  We set off on a reach toward Dungeness and were soon passing the large grey powerstation and a crowd of anglers on the beach.

We had planned to stop at Dymchurch after about 17 miles for a break and review of our progress but in the sheltered waters after Dungeness we were running at high speed and it seemed a pity to stop.  So it was lunch on the go as we raced past Hythe and Folkestone and on towards the headland of South Foreland.  As we surfed down waves one would surge ahead and then the other.  We maintained this sailing shuffle for some time and took photos of each other, and photos of each other taking photos.

As we approached Dover I radioed Dover Port Control to let them know we’d be crossing the busy harbour entrance.  As we past the harbour there were no ships in sight until suddenly four ferries appeared from different directions, either heading toward or out of the harbour entrance.  A couple of large course changes were needed to keep out of their way and we were glad when we left Dover behind and passed the white cliffs of South Foreland.

Shortly after the wind died and the tide was beginning to set against us so we put ashore at St Margaret’s Bay and with great difficulty dragged Ian’s boat up the steep shingly beach.  Ian set off to collect his car while I pitched my tent at the top of the beach and heated up tinned soup whilst looking at the lights of France and wishing I was somewhere other than a deserted, cold beach watching my boat bouncing around in the surf whilst at anchor.

I reminded myself I’d chosen to do this circumnavigation thing and it was never going to be all sunshine, beautiful scenery and plain sailing.  Later, when Ian returned in the dark, we retrived Stacey with an arrangement of ropes and pulleys (the ‘pig rig’) and dragged my boat above the high tide mark.  After a cup of tea, and just as the rain started, Ian departed with Astrid and I turned in (about 1 pm). 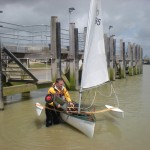 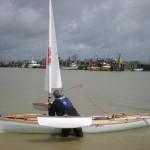 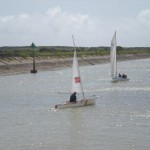 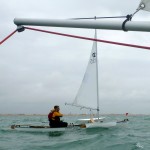 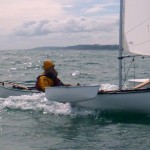 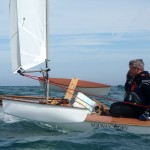 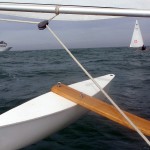 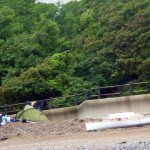 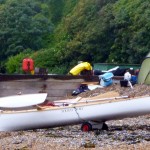