The rain was still pattering on the tent as I awoke Monday morning.  A cup of coffee improved my mood and I set about decamping, breakfasting and making ready to sail.  A party of school children and their teachers watched as I launched at about 9.30.  They were engaged on a history project and took photos as I departed (see below).

The wind was light but the tide was with me and South Foreland was soon rounded.  At last I had turned the bottom right hand corner of England and was sailing North!  Deal passed by with a seafront row of brightly coloured terraced houses, brightly lit by the sun in the South East.  I aimed for the low outline of North Foreland in the distance and was soon past the ferry port of Ramsgate but mercifully, with no ferries to dodge this time.

As I passed Broadstairs, the tide, which had been pushing me North, began to slacken and progress began to slow.  However, I managed to round North Foreland and started to tack Eastward against the beginnings of the ebb tide.  The wind then started to die. It became clear I wasn’t going to reach Margate, frustratingly close, just round the next minor headland – so I tacked toward a beach and paddle sailed furiously in order to avoid being swept back round North Foreland on the ebb tide.

I tried pulling Stacey up the beach on the trolley but the wheels sank into the soft sand.  Even the assistance of a passer by pulling on a rope didn’t help.  After chatting to Greg about the options for an overnight stop, I decided to stay where I was and pulled Stacey off her trolley.  I had more success dragging her up the sand without wheels.

For a beach so close to Margate, Botany Bay is remarkably unspoiled and has a wide expanse of sand fringed by a low grassy sand dune backed by low chalk cliffs. Luckliy, I’d landed at a great place to camp.  It was also a great opportunity to try out my two inflatable boat rollers as a means of pulling the boat above the high tide line.

Each took about 5 minutes to inflate by mouth and they were so successful that I needed to devise ways of stopping the boat rolling back down the shallow incline of the beach as I moved each roller from the back to the front of the boat.

As I fiddled about with bits of boat maintenance in the sunshine,  I looked northward at wind farms and ships at anchor in Margate roads.  What a contrast to the day before – looking North instead of South to France, sunshine instead of rain and a beautiful sandy beach perfect for an overnight camp. 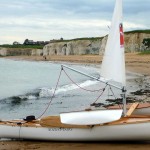 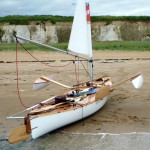 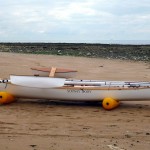 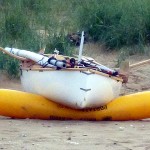 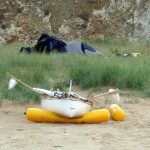 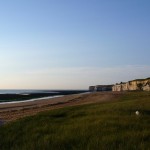 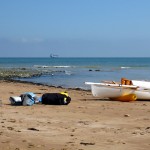 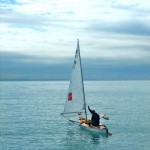 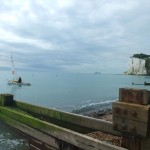