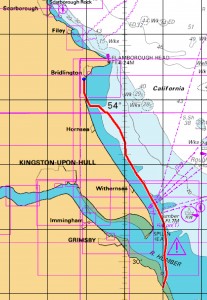 For some reason I didn’t sleep well. I was aware of the pattering of rain on the tent from time to time as I awoke from time to time and  tried to get comfortable in my sleeping bag on a Thermarest inflatable matt. When I crept out of the tent next to the River Eau, the water level was still low and the yachts and motor boats along the bank were resting on the mud. A passage to Bridlington (some 44 NM, and across the Humber Estuary) would mean an early start to catch the best of the tide running northward. To breakfast, take down the tent, pack everything into waterproof dry bags, check the forecast, look at charts and sailing directions for the day and load up the boat usually takes me a minimum of two and a half hours. So my 5 am alarm was timed to enable me to be on the water at 7.30 and out of the haven sailing north by 8 or shortly after. Thankfully, the rain didn’t resume until I was under way, close reaching down the channel towards the North Sea. The beach was under water as I followed the channel marked by posts and buoys. Whole families of seals came to have a look as I sailed by. I hoped this was a good omen. Sailing a small boat alone in the North Sea is beginning make me superstitious.

Gradually, I parted company from the low lying and misty coastline in the grey morning light and headed toward the big ship channel leading to the Humber Estuary. As I neared the channel a large ship passed from right to left ahead of me and I could see the matchstick-like silhouette of the lighthouse at Spurn Head ahead in the distance on the port bow. As the north-going tide picked up, I sailed through larger than expected overfalls with some breaking waves on the North side of the channel – but I found that as long as I pointed the boat straight any breaking waves I was able to sail through without difficulty.

For a time thereafter I sailed on uneventfully in the poor visibility with the Yorkshire coast and towns of Withernsea and Aldbrough just visible. A firing range just South of Hornsea meant I needed to stay east of the Greenwich meridian – so for an hour or so, assisted by the GPS, I amused myself by sailing due North in the Eastern Hemisphere, never coming any closer to the Western Hemisphere by anything less than 50 metres. Eventually I was able to edge slightly to the West and towards Bridlington in a fresh wind with moderately rough conditions. However, as I neared the coast the wind started to die and for the last 6 miles or so I paddle-sailed in the sunshine towards the clubhouse of the dinghy section of the Royal Yorkshire Yacht Club. Greg had made contact with Chris
Maw of the RYYC and as a result, Rachel and Ian Porter had very kindly and patiently been waiting for me as I made painfully slow progress against the now south-going tide. Paul Lister from the Open Canoe Sailing Group had also come to meet me and helped me pull Stacey from the water before Ian arrived with a tractor to help pull Stacey up the beach and through the dunes towards the clubhouse where I would later be able to sleep on a very soft and comfortable sofa. A beer and steak and kidney pie and chips supper with Paul followed unloading Stacey and leaving her secure in the boat compound. It had been an exhausting day and I’d been on the water for eleven hours, so was very grateful for the continuing generosity of friends and strangers. Rachel said there’d be a club barbeque and party the following evening so, as I fell asleep, I was very tempted not to move again tomorrow and take a day off in the predicted sunshine.