I like the convention, or maybe superstition, of titling a yacht log entry about a destination with ‘Towards’. It conveys a sense of aspiration rather than certainty and, for the superstitious, avoids tempting fate. This must have been all the more real in the days of sailing ships without engines and with very limited ability to sail to windward. I’m reminded daily of the dangers and uncertainties of previous maritime trade and travel by the countless wrecks marked on marine charts and littering the seabed around the shores of Britain.

Yesterday, I set out from Filey Sailing Club towards Whitby knowing the following stretches of northeast facing coast (between Scarborough and the Tees) can be uncompromising and dangerous when the wind is from the north or the east, offering few harbours and safe havens. Swells from strong winds can take days to die down. Little wonder it’s a paradise for surfers in such conditions.

The night before I’d said goodbye to Katherine and knowing I wouldn’t see her for another two weeks, I was feeling sad and a bit dejected. I also felt a sense of foreboding about the next day’s sail to Whitby, but couldn’t work out why. The forecast was for light winds from the North, and a slight to moderate sea state. During the night, gusts of wind rattled the tent a few times. I thought I could hear the distant roar of surf. But I dismissed these fitful, night-time impressions and put them down to my mood.

The next morning’s forecast was in agreement with the previous day’s. Making ready to sail involved walking all my kit in three relays (down a very steep hill to the beach) and I found it hard to be motivated under a grey sky and the continuing drizzle.

At 11am, I set off (later than planned). I sailed close to the Brigg, a natural breakwater at the north end of the bay, to take a few photos of white plumes of spray shooting into the air as breakers from the north hit the rocks. I was surprised at the amount of surf, but pressed on eastward to the cardinal mark beyond the end of the Brigg, where I turned north towards Whitby.

The tide had started to run northward and I assumed the five foot waves coming towards me were a localised effect caused by turbulence as the tide rushed over the underwater extension of the Brigg. However things were no better half a mile on. I looked up at bottle-green wave tops coming towards me (some with white breaking crests) whilst the headland started to disappear in a grey mist. The thought of continuing like this for another few hours to Whitby was starting to feel very unappealing and unsafe. I called Greg for a forecast update, but it still seemed to be at odds with what I was experiencing. I was also concerned about what sea state I’d encounter at the shallow north-facing harbour entrance at Whitby.

Water swirled around lobster pot buoys as the tide rushed towards Whitby, carrying me with it. So, a quick decision was called for on whether to carry on or to return, while I still could. I chose the latter, and sailed back slowly down the waves and back towards the cardinal mark, almost lost in the mist.

This had been my first retreat since I’d left Southampton but I was very relieved to be back ashore at Filey Sailing Club and eating bread and cheese whilst sitting on the end of the slipway.

Weather forecasts are sometimes wrong and, one day on, I’m still waiting to sail towards Whitby. Keith Morris arrived last night to sail with me for a few days, so we drove north to Whitby to look at the sea conditions at the harbour entrance. Large rollers came in between the twin breakwaters and on either side, large breaking waves rushed in towards the shore.

Little had changed this morning, so today has been a day for catching up on emails, laundry and blogging. Breakers are still crashing over the Brigg. Tomorrow, if the sea has calmed down, we might sail towards Whitby. 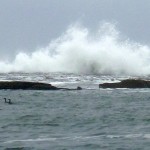 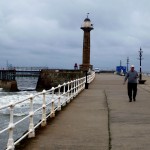 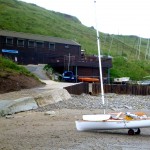 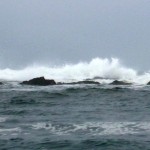