Around Flamborough Head and on to Filey… 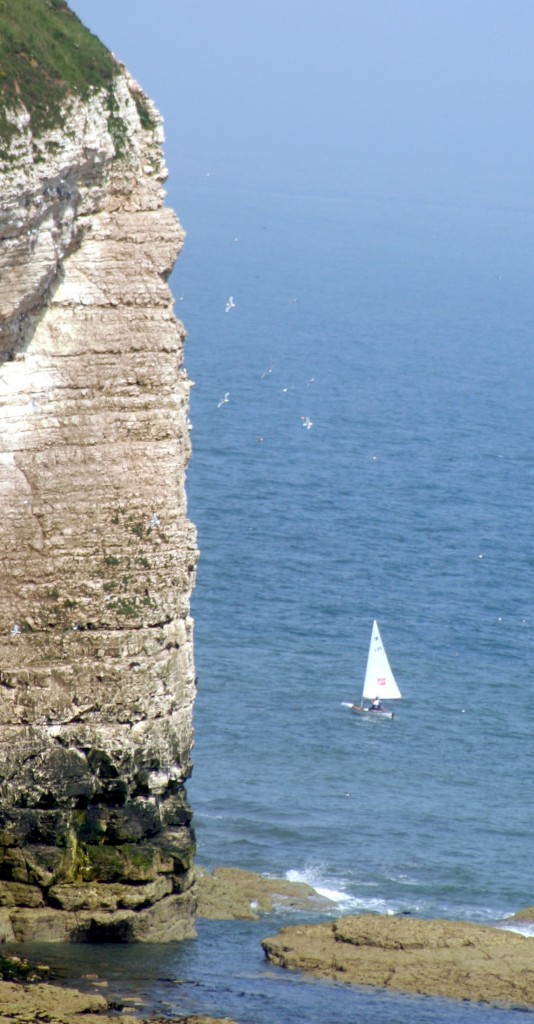 More fog meant Friday was another day ashore. Jim and David returned me to The Manor House before returning to London, and I occupied myself with writing in a beautiful book lined study with an open fire. Such is the peculiarity of this weather that it did not seem at all strange to be tucked up indoors with a fire on a July day.

Later, Katherine arrived and we walked down to South Landing, returning to the village along the cliff to Beacon and back via the churchyard. The Flamborough Head lighthouse sounded two mournful blasts every ninety seconds. Dave Stubbs of Solway Dory, one of the two builders of my sailing canoe, arrived with his wife, Hilary. We walked to a local pub for a meal before retiring to very comfortable beds.

Saturday morning’s breakfast of bantam eggs, bacon and toast was eaten in the study with sunlight streaming in through the window. We made plans for the day. Katherine wanted to visit the lighthouse whilst Dave and Hilary would watch me pass Flamborough Head and take a few photos from the cliff-top. We all hoped to return to Flamborough Manor one day.

Back at South Landing, Dave and Lesley (who’d just been for a swim) helped me lower Stacey down the steep ramp and over a small beach covered with small white chalk boulders. In the light wind, I tried paddle sailing for a short while… but gave up and resorted to just paddling. I headed for the gap between the cliffs and a long line of white breakers where the tidal race tumbled over an underwater obstruction. As I reached the headland, a slight breeze enabled me to sail on in the sunlight. I could just make out Dave’s silhouette on the cliff edge. Many small caves had been burrowed out of the bright white chalk of the cliffs, which were interspersed by small stony beaches. Skeins of Guillemots lay on the water, and I passed small groups of puffins which took fright as I approached within a few feet, and took off with whirring wings and feet pattering across the water. The Guillemots made their escape by either bobbing underwater or by launching themselves across the water like the puffins, but without becoming fully airborne. They bounced off the slight swell with a series of belly flops before coming to rest again.

As I passed the headland and drew level with Bempton Cliffs another ‘sea fret’ (northern words for sea fog) rolled in and the wind died – so I was back to paddling whilst following the misty outline of the cliffs to take me on towards Filey. The racket of thousands of sea-birds still filled the air. High above me, nesting gannets appeared as neatly spaced lines of white beads along horizontal and diagonal small ledges and fissures in the chalk.

Paddling with the long two bladed paddle felt easy and I was able to sustain about 2½ knots without difficulty, but it was another 4 hours before I’d paddled past the remainder the cliffs and then the beach, leading round to the top corner of the bay where Filey Sailing Club is located. Dave and Peter Crooks were there to meet me and helped to pull Stacey up the steep slope to the club’s dinghy park. 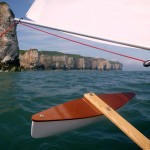 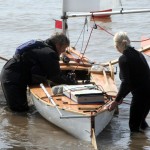 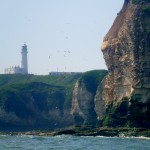 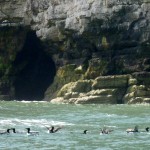 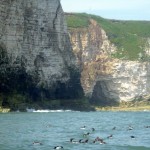 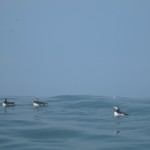 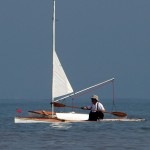 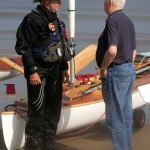 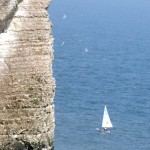