Amid big waves and fairground dodgems…

Keith and I had hoped to set out for Whitby on Tuesday, but waves were still crashing over the line of rocks (called the Brigg) at the north end of the bay.

The surfers website, Magic Seaweed was still predicting five foot high waves. Sheltered from the continuing rain in Keith’s camper van, I brought this blog up to date and Keith edited the Open Canoe Sailing Group magazine, Gossip. An evening trip to a restaurant in Filey provided a pleasant Italian meal and an internet connection for downloading emails and uploading words and photos.

Wednesday looked a bit better, and we thought there may be a chance of sailing the 21 nm to Whitby. Enquiries directed to Ian at Whitby Marina revealed that the surf and waves off the entrance were dying down. So after carrying all our stuff down the steep hill to to Filey Sailing Club we set off just before noon. Waves over the Brigg were still sending spray into the air, but not so high as the day before.

We were both feeling a little apprehensive about the conditions as we sailed out round the cardinal mark and directly into the path of a large swell from the north. Smaller steep waves coming more from the east. Unexpectedly, the wind direction was slightly offshore meaning, the sea state might deteriorate during the day. Sails reefed, we tacked, alternately out to sea and back toward the coast. The confused sea (with some breaking waves) made for difficult sailing, with our boats sometimes almost stopping when the hit a particularly large wave. Magic Seaweed later confirmed a wave height of four to five feet.

As we sailed on in the grey day, past high cliffs topped by green fields, the tide started to turn in our favour to the north and the waves began to get larger. Ruffles of wind across the water preceded increasing gusts. Nestled behind a headland, Scarborough appeared in the distance. A quick shouted conversation with Keith confirmed we were thinking the same thing – time for our ‘plan B’. This was to head for the security of Scarborough rather than to continue upwind to Whitby, which might take another 6 hours or more.

Sunshine broke through the clouds as we reached the shelter of the headland. Paddling between the high stone piers of the harbour entrance revealed yachts, fishing boats and the Scarborough seafront where we pulled the boats out of the water and onto a wide slipway. We’d no idea where to stay or where to store the boats securely for the night but were recommended to enquire at the Ivy House Cafe and B&B.

I explained our situation to the owner, Alison, who thought we were nuts but also deserved a medal. She very kindly offered us a very attractive room, with views over the harbour, at less than half price and suggested storing the sailing canoes in her fairground, over the road. We were able to tuck the boats up securely with the dodgems for the night… 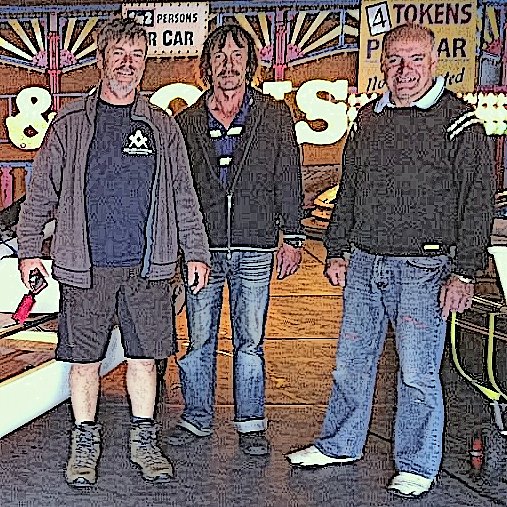 We felt very fortunate to have been treated so kindly and headed off along the sea front for a meal of mussels and chips… followed by a couple of beers at Scarborough Yacht Club (on the end of the pier).