Hartlepool to the Tyne…

Newspapers this morning talked of a normal summer resuming, gradually. Let’s hope so. This strange summer has seems more like winter at times and my slow progress northward in the face of frequent northerly and easterly winds had begun to become dispiriting at times. Determined to lift my mood and experience a little of Hartlepool on the Saturday night before I left, I set out for the nearby Small Crafts Club. I imagined I might find some company with small craft sailors and enthusiasts. The club seems quiet as I walked down a dockside back street and I wondered whether the members had all gone home. So, as I walked through the soundproofed, intercom controlled door, I was not prepared for a crowded, riotous and very friendly working men and women’s club with a full-on karaoke night in full swing.

I fell in with a small group of lads out on a stag night. The brother of the groom, David, said he was a prize fighter and looked the part. But he was not looking forward to a fight tomorrow with his best mate and thought they might forego the contest. I sympathised and thought he might be better off nursing a hangover, but didn’t say so. He was also celebrating the birth of twin daughters earlier in the day.

At the end of the room with twin lines of long tables leading to the stage, singers took their turn. Some were very good, others less so. Judging I’d be in the latter category, I avoided the microphone.

David and the stag night group wanted to know what brought me to Hartlepool, so I explained as best I could. David’s brother Mark said he admired my ambition and David wanted to know if the sailing canoe could take passengers. Thinking he was asking about sailing 2-up on a day trip, I replied “yes.” However, David became irrevocably fixed on the notion of sailing up to Scotland with me and no amount of shouted discussion would dissuade him from putting me up for the night and setting sail sail with me the day. Taking advantage of David’s visit to the bar, I made my excuses and left.

Feeling a little below par the next morning, I struggled out of the tent warmed by the early morning sun. Coffee, a quick blog, with sunlight streaming through the windows of the club bar, and packing up followed. I was away before 11 am and waved goodbye to Micky and Mike who’d helped me launch. I wished I’d been able to stay a little longer in Hartlepool which has a lot more to offer than I expected and has clearly benefited from much Dockside regeneration, but also has a strong maritime tradition. I regretted not visiting the Hartlepool Maritime Museum. Thanks to all at Hartlepool and Teeside Yacht Club who made me so welcome and looked after me; I’d like to return. The club photographer took some excellent photos of me and the boat. I have a disk with many photos, but here is one kindly contributed by e-mail: 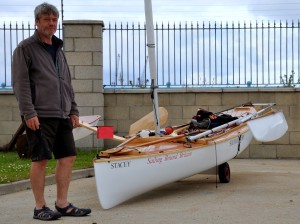 Running out past the North pier I turned left along the East facing coast. The wind was more from the north than forecast and instead of an easy reach, I found myself sailing up wind and into little short, steep waves that threw curtains of spray across the boat. Gusts, flurrying out from the small cliffs on the left of my track, ruffled the water and heeled Stacey over before I could move my weight out to counteract. A Dinghy Cruising Assocation contact, Ed Wingfield, had kindly offered to meet up en route and sail in company. He was sailing a a 10 metre Beneteau yacht and was returning to the Tyne from Sunderland. After some four hours of my slow progress against the wind and waves we met just north of Seaham and continued on towards Sunderland and then the Tyne.

Occasionally the wind would back to the west a little, when I’d be able to unfurl a bit more mainsail and speed would increase to between 5 and 6 knots. Seven hours after departure from Hartlepool, we neared the twin piers of the River Tyne entrance. With two cruise ships due for departure and wind and tide against me, Ed thought it would be best if he towed me to our destination, the Royal Quays Marina two miles away. I agreed, and seeing the strength of the ebb, added to by the peaty brown fresh water spate after recent heavy rain, I could see I would have had to wait several hours for the tide to turn before sailing upstream.

Southampton to Newcastle, or at least to the Tyne. One home town, for the last 40 years plus, to another home town, of my birth and childhood. A circle completed and a sense of returning home.

Transitting the lock at the Marina entrance was a new experience, but useful with over 20 locks to come in the Caledonia canal. Stacey was moored to a small pontoon and I went aboard Ed’s yacht, Samphire, for a welcome cup of tea before a beer and cheese toastie aboard the Earl of Zetland floating bar and retiring to Samphire’s forward cabin for the night.