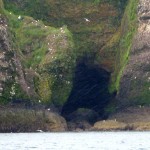 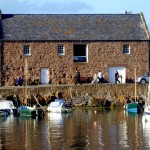 The small campsite at Milton Haven was a perfect place to camp with the boat on the beach nearby. Unfortunately, I managed to upset the owner who sped towards us on his quad bike, like a four wheeled dour version of Mr McHenry from the Magic Roundabout, to inform us I’d pitched a tent next to the campervan in an area that was for campervans only – as he’d clearly explained when Dave and Hilary had arrived. He now repeated himself three times over, just be certain we had received the message. However, moving the tent a few yards to the left seemed to pacify him and Mr McHenry ensured a quiet evening free from rowdy youngsters and barking dogs . Thereafter, we were careful to obey all the rules and so were left in peace for the rest of our stay.

Monday dawned grey and overcast with little wind. The previous day’s sail from Arbroath had brought me 16 nautical miles up the coast. Actually, I had sailed 21 across the ground as I’d tacked northward. The wind was again forecast to be light and from the ‘wrong’ direction, but I was keen to continue to make progress and try to reach Stonehaven, some 13 nautical miles along the coast. Dave and I thought the day would be a good opportunity to experiment with the relative merits of tacking (just sailing), paddle-sailing (and tacking) and just paddling upwind. Dave set up the GPS to display ‘Velocity Made Good’ (or VMG) to windward which measures speed towards an upwind destination rather than speed across the ground or through the water. This would help me to work out which of the three canoe sailing options was the fastest upwind.

Setting off after breakfast and tacking upwind, I passed a series of tall rugged cliffs with a great many sea caves, some spectacular water sculpted rock arches and several small streams cascading over the cliffs onto the rocks below. I felt a strong desire to land, pause and soak in the scenery for a while. However, the tide was soon due to turn against me so I pressed on in mostly force 2 conditions. Experimenting with the various upwind options gave the approximate results for VMG of; just paddling with a double bladed paddle – 2.2 knots, just sailing – 2.7 knots, and paddle sailing with a single bladed paddle – 3.2 knots. As I fought upwind against the increasing south going tide and the wind becoming fitful, some fairly aggressive paddle sailing was need to clear Downie Point just south of Stonehaven. On a starboard tack I inched northward at 1 to 2 knots over the ground and on a port tack the tide swept me south, back towards Milton Haven. Thankfully, the port tacks were short and just after Downie Point the wind picked up a little and I was able to sail into the small sandy bay just south of Stonehaven harbour. The local sailing club found a space nearby for me to park Stacey for the night and Dave, Hilary and I booked into a B&B conveniently situated very close to the harbour. During the day I’d sailed 17 nautical miles across the ground.

One Response to “Milton Haven to Stonehaven…”