Staying with Jo Richard and Mathew on Tuesday 12th June was a perfect way to rest, recharge my batteries, dry out and prepare for the next legs of my journey East. Their conservatory was turned into a sailing and camping kit drying room for a day and their house became a home from home for an interlude. The next day, Jo’s father in law had kindly offered to drive me to the Marina at Newhaven, which had very generously offered to let me leave Stacey with them free of charge. Many thanks to the manager, John Stirling, and all at the marina who were so helpful. By noon I had repacked gear into the boat and was ready to leave in bright sunshine. Simpson Marine let me use their slipway for free and I was soon leaving the harbour on the last of the ebb.

Light winds made upwind progress through waves slow and it took me some time to reach Beachy Head, approximately 8 miles away to the east. I’m beginning to appreciate the significance of headlands to previous generations of sailors. Each has its own character and history with different sorts of dangers out to sea or not. Passing a headland, particularly when tacking upwind is a an important milestone on the journey which carries a sense of achievement as the corner is turned and the next section of coast revealed. Selsey Bill – low but with dangerous shoal waters, and when there is strong wind against tide, tidal races and large breaking waves 5 miles out to sea. Beachy Head with less outlying dangers but with high white cliffs and at the bottom, a picture postcard lighthouse painted in red and white horizontal stripes. The next headland for me is Dungeness. From the beach, close to where I’m staying now, I can see it in the distance, with the squat shape of the power station at the end, but also with a promise of calmer waters beyond, sheltered from the prevailing South Westerly wind.

As I tacked toward Beachy Head I exchanged texts with Liz Baker, a DCA member, who’d wanted to watch me pass the headland. I’m beginning to perfect the art of texting while sitting out to keep Stacey upright. But I’ve have taken the precaution of putting my phone on a string round my neck. Once past Beachy Head I was able to mostly stay on a starboard tack and as the tide began to flow my way our speed picked up as we sailed past Eastbourne. I had hoped I might get as far as Rye but the wind progressively turned into yet another headwind and after several hours of tacking, the tide turned against me.

I’d been keeping in touch with Greg and after several conversations on the basis of OS maps and charts on Stacey and Google Earth maps viewed by Greg we decided on a landing approximately half way between Bexhill and Hastings, where I might get away with pitching a tent for the night. However, closer inspection from sailing inshore revealed it was steeply sloping shingle with fairly large breaking waves dumping on the beach – not the best sort of landing and very difficult to get the boat out the water. I’m learning the best course is often stop and ask, so I furled the sail, removed the rudder from the stern as a precaution and anchored a few yards out to be able to wade ashore and talk to a local angler. He looked a bit concerned about me striding along the beach towards but he said he liked the look of Stacey and said she’d be a great boat for angling- but he was pessimistic about the chances of an easy landing anywhere nearby. So I was beginning to reconcile myself to the prospect of an uncomfortable night at anchor in the boat – at least a fine night was forecast.

As we were talking I spied a few sailing dinghies off Hastings in the distance and thought Wednesday is usually a sailing club racing evening. My angling friend confirmed the sailing club did have some way of getting their dinghies ashore, but he wasn’t clear how. So I set off ‘paddle sailing’ against the tide in haste, hoping I’d catch up with the dinghies’ owners before all their boats were ashore and their owners were in the bar. The beginnings of Hastings’ sea front passed by slowly as I paddle sailed energetically. I managed to near the last dinghy on the water and we exchanged a few words – which meant that a number of club members were then ready to grab my boat as I landed.

St Leonards and Hastings sailing club members are Olympic class dinghy launch and recovery experts. The beach in front of their clubhouse slopes steeply down to the sea and is exposed to the South, so they have huge experience of challenging launches and landings. The method for landing is to point the boat at the beach, keep full power on, at the last second lift the centreboard and rudder and, with weight well back in the boat, simply sail up the beach on the crest of a wave to a welcoming committee of members willing to bodily haul the boat out the water. I watched the last sailing dinghy execute the manoeuvre with style and waited my turn. However, being chicken and a bit precious about Stacey’s bottom, I furled the sail before landing under paddle. Fortunately, there were enough bodies to manhandle her out the water before the next wave dumped on the beach and Stacey was none the worse for wear, apart from a few minor scratches.

To be continued soon on www.canoesailor.com……. 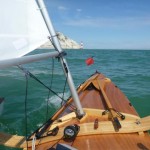 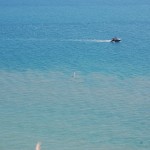 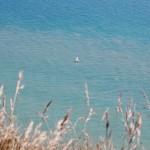