At 5.30 am, after the trials of the evening and night before it was difficult to emerge from the warm cocoon of 2 layers of Merino wool, a fleece, sleeping bag and bivi bag. But as the sun rising over the sea gradually warmed the day I rose from my sandy bed on the beach, made coffee and contemplated the day ahead. There were still another 32 nautical miles to go before the first harbour at Blakeney, and the intervening coast, with the continuing swell from the northeast still softly exploding on the beach, was beginning to give me the willies. The day before my plan had been to land, sleep on the beach for a few hours and move on as quickly as possible on the next tide, but I would be late departing and the forecast had been for continuing light winds.

Stacey was at the top of the beach beside me. So, I’d have to pack up, drag the boat to the sea, transport drybags, anchor bag, trolley and all the other paraphernalia down the beach, load up and then pull boat and kit the last few yards down the steeply shelving part of the beach and into the water. This took a while and I then found the mast had jammed solid in the mast socket due to sand, no doubt from last night’s capsize in the breakers. Without being able to rotate the mast I would not be able to reef so I set about flushing out the mast socket with buckets of water and trying to also remove some of the sand by sticking it to the mast with suntan oil and then repeatedly withdrawing the mast and wiping it off with a bit of paper towel. After having more or less solved the mast problem I had a similar issue with the rudder with sand preventing me raising and lowering it. However, launching was a lot easier than landing and by the time I set off at 7.30 am the day was feeling appreciably warmer as a breeze was starting to pick up from the south-east.

My late launch would only give me 2 hours of fair tide in light winds. So I hoped for a softer landing than the night before so I could sit out the foul tide, catch up on a bit of sleep and writing the account of the voyage. Alternatively, I could drop the anchor and bob about for a few hours. Small towns and villages on the coast, each with an impressive stone church and square bell tower, passed by in the sunshine. I’d never seen so many churches along a stretch of shoreline and thought this must have been a coast previously populated by seafaring and god fearing folk and that maybe the particular hazards of the Norfolk coastline could have had something to do with this. As the northward tide slackened, the beach at Mundesley presented an opportunity to get ashore, but the small town dominated by a North Sea gas terminal didn’t appeal and I was also dissuaded by breakers along the strand.

However, the following wind had picked up so we ploughed on making 3 to 4 knots against the tide and there seemed a good prospect of reaching one of the North Norfolk harbours before the end of the day. At Cromer with its large church and  rows of brightly coloured houses descending to a small beach I paused (hove to) for a phone call to Greg, some lunch, to reef and also to take photos of waves crashing against a sea wall with white spray flying into the air in front of some multi-coloured beach huts. I pressed on passing a long stretch of grey pebbly beach before sighting the wide sandy beaches and dunes of Blakeney Point.

The following wind died and was replaced by a new wind and rain from the south west. So as I sailed on towards Wells I had the unusual experience of sailing upwind with following waves. Eventually at around 6pm I reached the entrance to the Wells channel and sailed over the bar in less than a foot of water. At about an hour before low water the channel leading to Wells with its important north Norfolk harbour was very shallow and at times only a few inches deep. Sailing or paddling against the strong ebb stream proved impossible so I slowly trudged alongside the 3 mile channel to Wells towing Stacey behind me.

I vaguely remembered something about ‘lining’ canoes along rivers, so experimented with twin lines attached to bow and stern and found it possible by controlling the pull on each, to steer the boat up the centre of the channel with me walking the bank. By the time I’d  passed the Lifeboat station I was exhausted and it was apparent there was another mile to go. I’d been unable to find anyone who could say whether there was a slipway at the harbour. Camping options seemed non-existent and after 15 hours on the go after limited sleep I began to have a serious sense of humour failure. At that precise moment the phone rang. Greg told me he’d been watching my progress on Spot Messenger, or the lack of it, and had made enquiries by phoning a few numbers in Wells. The principal of a local sailing school, Robert White of Oceanus Sailing, was on his way with two friends to help me pull Stacey out the water, up a very steep beach and on about half a mile to a local campsite.

So if you’re reading any of this guys, thanks for being the cavalry and helping hugely at the end of a very long day. Thanks also Greg for pulling that one out the bag when it was much needed. By 10.30 pm, after pitching the tent and some bread and cheese, I was spark out. 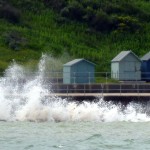 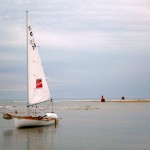