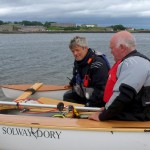 Sailing With Steve at Berwick 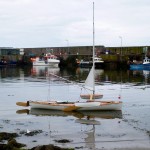 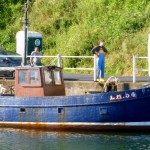 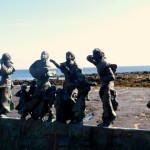 Memorial at Burnmouth – Fishing Disaster of 1881 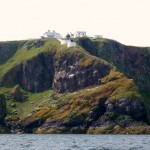 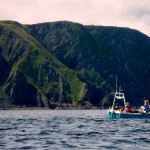 I was fortunate to have arrived at the sailing club on the weekend of the annual Coquet Shorebase Trust’s three day visit to Berwick Sailing Club. The trust is a community based watersports centre offering sailing, canoeing and kayaking for all. Berwick Sailing Club has become a fixture in their annual calendar and provides an excellent base for coastal and river canoeing and kayaking. A party of kayakers returned from a 6 mile long paddle down the Tweed soon after I’d showered and changed. Over lunch they reported some difficulty with the strong wind but an otherwise excellent down river trip. Berwick Sailing Club is an ideal location for sailing and canoeing events with river paddling, sailing / paddling in the harbour and out at sea all close to hand. Camping is possible and the club is very welcoming and hospitable.

Katherine arrived with our camper van during lunch. It was the first we’d seen of each other for two weeks. Later, we were made very welcome at a barbeque in the evening and discussed the trust’s open access policy which enables people of all ages and all abilities to learn how to sail and paddle. The trust organises an annual canoeing and sailing race from Amble around Coquet Island and back with a party afterwards. I’d very much like to meet this enthusiastic and friendly group again, so hope to make it back to Amble next year to take part in the Coquet Island race in June.

Next day, on Monday, I took Steve, one of the group members, for a short sail on the river. Later, Katherine and I took a walk around the ancient town walls, built in the 16th century to defend the town against the Scots. The Act of Union followed 30 years after the completion of the walls – so they were never fought over and are the nation’s best preserved Elizabethan fortifications. Well worth a visit to see the impressive walls, ramparts and cunningly designed gun batteries able to repel an enemy at a distance but also close to the town walls. After lunch, all from Coquet Shorebase departed and the sailing club seemed very quiet after all the activity of the previous day and a half.

Reluctant to leave, we slowly packed up next morning and I departed close to noon. A strong ebb tide propelled me down the river to the harbour entrance where I turned north, sailing close to the line of dark rocky cliffs, interspersed with green slopes. Sailing slowly in the sunshine, I wasn’t sure I’d left early enough to reach Eyemouth before the tide turned against me. As I neared a small cove thick clouds formed at the top of the cliffs, whilst out to sea the northeast the horizon disappeared beneath a bank of fog. Looking at the cove, I could see three small groups of houses between the sea and the high cliffs behind. My charts revealed the cove was Burnmouth with a small harbour accessible at most states of the tide. Carefully following the leading marks in the steep ravine leading down to the cove, I sailed toward the concealed harbour entrance. A group of three grey seals on a rock slid into the clear water as I approached.

Inside the harbour I was able to pull Stacey out a small slipway before walking toward a white cottage at the north end of the bay where I was told I might find the harbour master. I didn’t locate harbour master, John, until sometime later but along the way several people took an interest in my boat and my journey northward. When I did eventually find John he asked if I knew there was a charge for landing and launching but on hearing about the purpose of my sail he waived all charges and said I’d be welcome to stay as long as I wanted. We looked at his small open boat which he thought might be the smallest registered fishing boat in Britain. He used it for creel (lobster pot) fishing and hoped to continue fishing until his eighties to become Britain’s oldest fisherman. Katherine soon arrived with the camper van which we parked next to a harbour jetty before visiting the pub, The Gull’s Nest, at the top of very steep road leading up to the cliff-top. Just over the border from England, the pub is also known as ‘The First and Last’.

Coffee and passage planning were the next morning’s first priorities. I hoped this day’s sail would take me to Dunbar passing St Abb’s Head along the way. As I was looking up tide times a fisherman approached and tapped on the window. I rolled it down and he said “for your charity” handing me a tenner. I assumed someone had told him of my arrival and purposes of my trip. Later, seeing him and his crew loading up a fishing boat with fish boxes, I went over to talk.

Alistair was the owner of a wooden fishing boat called the Village Belle. He’d had her 40 years since new but was finding small fish quotas, for example only 35kg of mackerel per week, were making it very difficult to scratch a living. He doubted there would be any fishing boats left along this stretch of coast in ten years’ time. Alistair also ran trips for anglers. He told me that the recent run of bad weather with long periods of northerly and easterly winds had led to 70% of these fishing trips being cancelled. This made his generosity all the more special. However, as I’ve previously recorded, on this voyage I’ve found people in almost everywhere I’ve visited keen to offer me assistance whether it be helping to pull the boat up a beach, or a bed for the night, or somewhere to store the boat, or a meal.

Alistair’s gift reminded me of one of the purposes of my voyage which is to raise money for Hospitality Action. This charity for Catering and Hospitality Industry workers in need may not initially quite tug at the heart strings in the way that some other charities might but they do excellent work and are a lifeline to many. So please have a look at their website and make a donation, even if only a small one, by visiting this blog and clicking on the Just Giving link.

Before leaving Burnmouth, Katherine and I looked at a small harbour wall memorial to those that died in the terrible fishing disaster of 1881. On Monday 17th Oct 1881 the Edinburgh Evening News reported:

The disastrous results of the storm last week have now been properly realised and it is seen that so far as the Berwickshire fishing fleet is concerned, they are the most appalling that have fallen upon the fishing population of that quarter within living memory. Of the boats belonging to Eyemouth alone, several were wrecked within sight of the harbour and altogether 64 lives are known to have been lost, while 11 boats with 74 persons on board are still missing. There is but too much reason to fear that most of them will never be heard of.

Another £20 donation to Hospitality Action followed from another stranger, on holiday but with strong connections to Burnmouth. Glad to be in Scotland and setting sail in fine weather, I made ready to depart and around 11 am, paddled out to sea, setting sail for Dunbar just outside the harbour entrance.

As I departed from Burnmouth around 11 am, the forecast for Wednesday 25th July was for variable light winds and sun. Away from the harbour I found the light breeze was from the north. Tacking slowly towards the point just South of Eyemouth, I could see from the light ripples around the creel buoys that the north going tidal flow was beginning to gather pace. A Dutch yacht travelling in the opposite direction passed close by. I exchanged waves with the crew and took a photo of the only yacht I passed close to in the North Sea. St Abb’s gradually increased in size. A lighthouse and several white buildings stood on top of the high rocky headland with patches of green sward running down towards the sea. Sailing very close to the rocks I rounded the headland to see the south shore of the Firth of Forth stretching away to the west. The light wind died as I passed a small fishing boat checking creels for lobster.

With the mainsail furled I paddled toward the distant outline of Torness nuclear power station east of Dunbar. I’d left most of my camping equipment and other baggage in the campervan so powering along at a speed of just over 3 knots was easy work. For a while a seal followed me for a while, revealing his presence with loud exhalations as he surfaced, but as soon as I looked behind he’d shyly dive below the surface again. I tried to catch a photo of the seal during this game of grandma’s footsteps but he was too elusive. From time to time a sea breeze would persuade me to stop paddling and unfurl the sail and I’d briefly speed along at 4 knots. But then the wind would fade away and I’d be back to paddling.

Close to the harbour at Dunbar, I carefully followed the safe passage between several large rocks and then paddled in through the narrow cleft in the rocks which leads to the harbour. Katherine was there to meet me and had met the harbour master who raised the small lifting bridge so I could pass through to the small inner harbour without dropping the mast. Bob Clunas, the harbourmaster helped me pull Stacey up the slipway and said it was no problem to park the boat and campervan next to the harbour while we stayed in Dunbar.

← Lindisfarne to Berwick in a Strong Wind…
Firth of Forth, Take I: out to Bass Rock… →