Lindisfarne to Berwick in a Strong Wind… 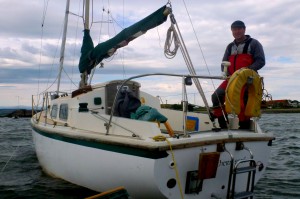 I slept well on the yacht Northern Soul. In the morning, enjoying the feeling of being dry and warm, I lay in the forward cabin thinking about the day ahead whilst halyards clanked against the mast. I was grateful for Steve’s kind offer of shelter on his yacht Northern Soul, without which I would have had a much less comfortable night. Katherine was due to join me at Berwick which was about 8 nautical miles away by sea. I was looking forward to a short sail in moderate westerly winds and to seeing Katherine later that morning.

Steve made tea and toast and we shared the last of his jam on the toast whilst listening to the inshore waters forecast over the marine VHF radio. The forecast for the day had changed and the prediction was now Force 4 to 5 winds occasionally gusting 6 with a warning of force 8 later (i.e. in 12 or more hours’ time). Greg confirmed XC weather was predicting much the same so I was keen to set sail before the wind increased any further.

Casting off, Steve and I took photos of each other and our boats before I tacked out of the small bay under a reefed mainsail. Reversing the path in from the sea was simple enough but this time the ebb tide sped me on my way and I was soon sailing north with Lindisfarne close on the port side. Gusts of wind swept me along with the waves to Emmanuel Head where I turned to port towards Berwick, just discernible as a slight dip in the distant line of cliffs stretching away to the North.

The offshore wind protected me from large waves. Nevertheless, sailing into small but short steep waves, spray flew across the foredeck and fairly frequent bailing was required. I steered a course upwind of Berwick. This was partly as an insurance against the wind veering, but also to bring me closer to the shore where, with less fetch, the waves would be smaller. As the wind gradually increased over the course of the next two hours I progressively reefed (by rolling the sail around the mast) until there were 5 reefs in. I experimented with 6 reefs but found with this tiny amount of sail it was not possible to sail upwind. So I carried on with 5 reefs, spilling wind in fierce gusts.

Fortunately, I was now close to the shore and landed on the sandy beach for a respite and to consider whether I’d be able to sail to Berwick harbour, 2 miles to the North. Greg made enquiries with Berwick Sailing Club where the commodore, Alistair, confirmed conditions at the harbour entrance weren’t difficult although there was a strong fresh water spate coming down the river which might mean paddling against wind and the water flow, once inside the harbour entrance. 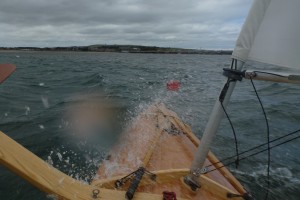 Checking the forecasts again with Greg, it seemed there was no immediate prospect of a sudden further increase in wind strength so I took advantage of a slight lull in the wind to launch. Sailing close inshore on a reach, gusts, showing as dark ruffles on the water, swept toward me. Still with 5 reefs, boat speed in the gusts surged to over 6 knots, so it didn’t take long to reach the safety of Berwick harbour. Due to the strong winds the sailing club had given up sailing for the day but they kindly sent the club safety boat to motor alongside as I tacked upstream against the flow of clear brown peaty fresh water.

I was ashore soon after 1.00 pm. Sailing club members and visitors from the Coquet Canoe Club helped pull Stacey up the steep sandy river bank. Alistair arrived to say hello and assured me Katherine and I would be very welcome to camp at the club and use their showers. As I looked across the river to the 16th century town walls and the town beyond I was glad to be safely ashore with a warm welcome from Berwick Sailing Club.

← Amble to Lindisfarne…
Berwick to Dunbar… →