After the Thames Estuary crossing on Tuesday, and with little prospect of the long period of unsettled weather ending, I’d been feeling a bit gloomy about prospects for Wednesday… but after a good night’s sleep at my sister’s home, followed by coffee and marmite on toast, things looked brighter. The wind was forecast to be fairly strong, again, but the breeze and the tide would be going my way and I thought I could sail the twenty or so miles round the next corner to Harwich before the next batch of stronger winds arrived.

On Wednesday morning, Mary drove me back to Brightlingsea along with my dried out kit. Geoff and Penny (from the Dinghy Cruising Association) were there to meet me as I arrived at the boatyard, and a couple of open canoeists and sailors, Mark and Nick, had arrived to have a look at Stacey and ask about the trip. We chatted as I pulled on a merino wool base layer and pulled on my drysuit.

I misjudged the strength of the strong ebb tide in the creek as I departed in the early afternoon and was almost swept into a boat alongside the pontoon. However, a few swift paddle strokes averted a collision. I turned to wave goodbye to the five figures on the end of the pontoon and was soon swept out of the creek into the river Colne. The winds were lighter than expected and a few tacks were needed before I passed Colne Point and turned left into the Thames Estuary.

Rain showers swept by as we sailed past Clacton on Sea. The increasing gloom made me regret not putting my removable (magnetically secured) LED navigation light on top of the mast, so I furled the sail, dropped the mast and attached the nav light. I’d done this before at sea without difficulty but waves rocking the boat made the operation tricky and I was aware of a danger of dropping the mast, and sail, over the side. I resolved not to try this at sea again!

As I sailed past Walton on the Naze, I mused on my sense of time passing. Three hours at sea had passed quickly and pleasantly. Even with the rain I was warm and dry inside my drysuit. There was plenty to look at, think about and to do. Yet, a three hour car journey can seem lengthy and tiring. Also, if conditions allow, I’m able to send and receive texts and chat on the mobile. Surprisingly, or maybe not, I’ve been in much closer contact with family and friends since starting this journey.

As the distant grey silhouettes of the cranes at Felixstowe came into view the wind started to freshen, as forecast. Surfing along waves at up to 8 knots was exciting but not prudent in a small boat on my own, so I reefed. A yacht approaching the port from the East converged with my course and a man standing in the cockpit took pictures of Stacey and as we made toward shelter, I wondered what he made of us.

Greg, true to form, had been working on a plan for a stop at Shotley, just over estuary from Harwich. He put me in touch with a friend of his, Steve Hawksley, who was at the slip to meet me and help me pull Stacey a water a ½ mile up a hill to his home. We unloaded and chained Stacey to a tree in the garden before eating pasta and walking, in the wind and rain, to the to the marina bar for a pint. 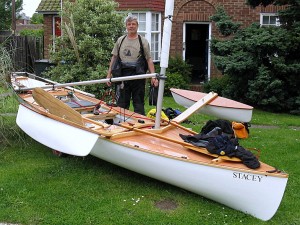 I stayed with Steve for two nights and a day whilst waiting for better weather and was very grateful for his kind hospitality and welcome into his home with a beautiful small garden out back. Steve modestly talked of sailing tall ships, restoring wooden boats and a great many other interesting things and we also discussed my journey, in between his work and my journal writing and poring over charts.