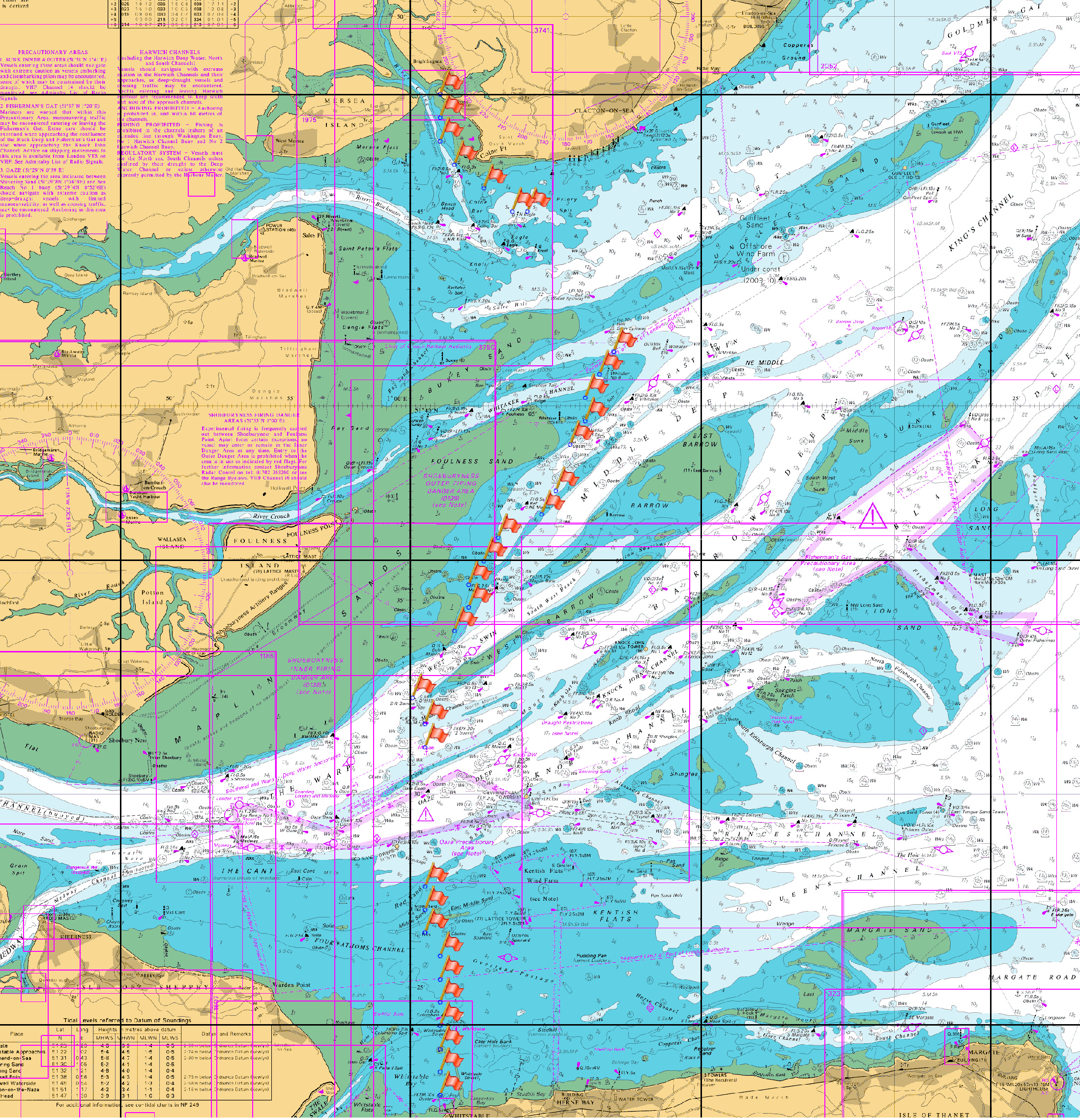 I was sorry to leave Whistable. This North Kent seaside town is a delight and my idea of a proper seaside town with beached, brightly painted beach huts, a great choice of restaurants and pubs, and a fishing boat harbour. Everyone I met at Whitstable Yacht Club was friendly and helpful. Jason from the sailing school found a space in the boat shed for Stacey and Sally and Jane gave a warm welcome and found me a bunkroom for the night. Still, there was little choice about leaving and the conditions were ideal for a passage across the Thames Estuary to Brightlingsea. If I left it another day then there might be too little wind and yet another deep depression was forecast to arrive on Friday.

The evening before, feeling a little daunted by the combination of changing tides, sandbanks and shipping lanes I’d run my passage plan by Mark Saddler who has been providing wise counsel on the basis of his many UK circumnavigations and extensive sailing experience. I was reassured when Mark said I appeared to have thought through the issues of changing tidal set, wind strength and direction, route and various ‘what if’ scenarios.

I loaded up the boat near the wooden club slipway, in the sunshine. After saying goodbyes I pushed off, clambered aboard and sailed northeastward in a light breeze. Raising the rudder and ‘paddle sailing’ using my body weight and paddle strokes to steer added almost a knot to our boatspeed and was a satisfying way to progress upwind in a light breeze. A Thames barge with tan sails and on a parallel course to leeeward dropped behind as I ‘paddle sailed’ for the next hour and a half. With the tide pushing me westward, while I steered 030 (a bit East of North), my slightly crabwise northward course brought me close to Red Sand Towers. These strange looking Second World War rusty gun emplacements looked like leftovers from the ‘War of the Worlds’, marooned in the middle of the estuary. I hate to think what it would have been like, being stationed on these structures waiting for enemy bombers to arrive. 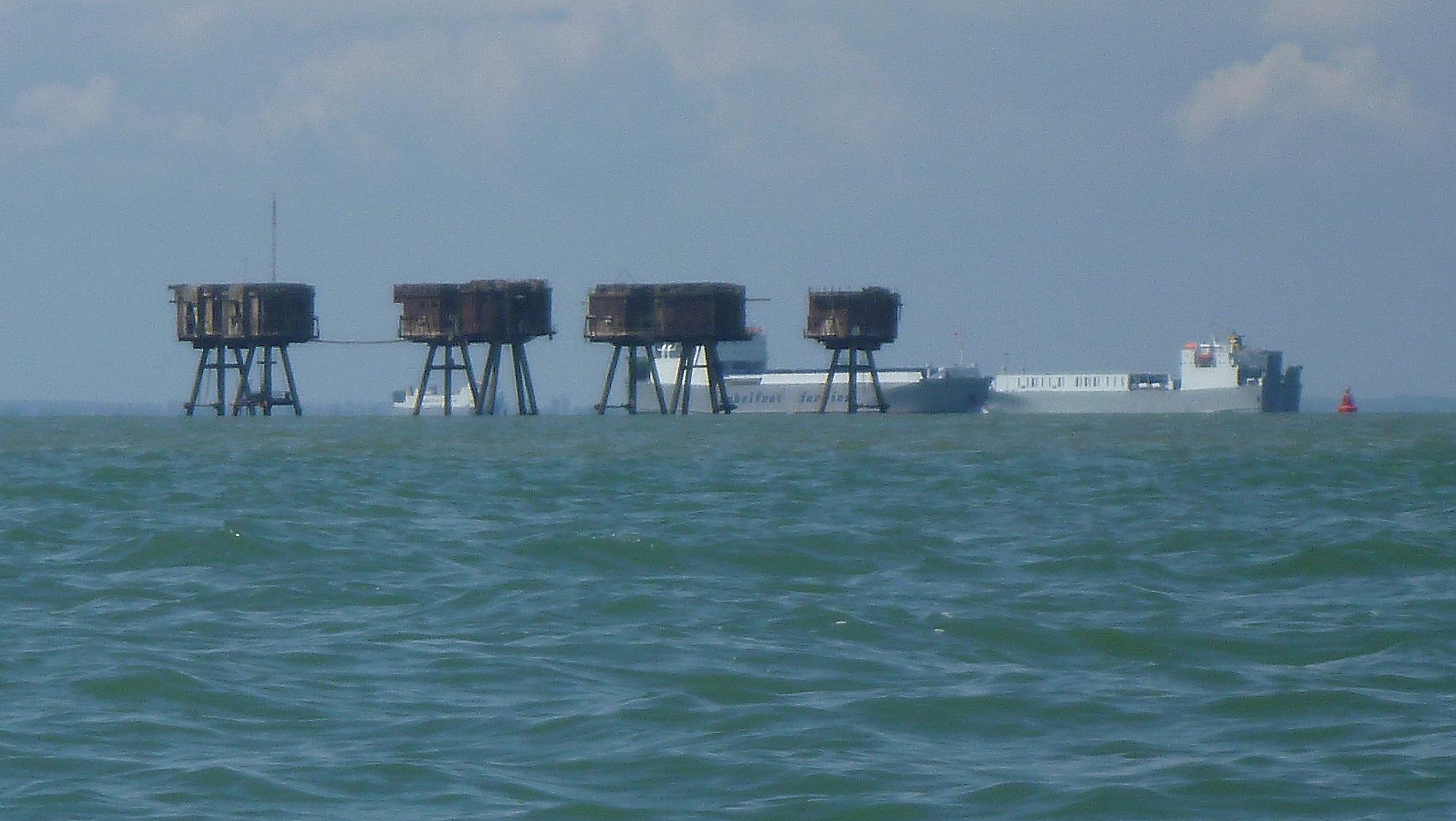 The shipping lanes presented no challenges with only three ferries passing in front, some distance away. As the tide paused before flowing back in the other direction, the wind began to increase. Two reefs were needed to avoid pushing myself and the boat too hard. As I passed Maplin and Foulness Sands, beating into the wind and waves became a bit of a slog and more layers of clothing under, my sailing jacket, were needed to keep warm. I regretted not wearing my dry suit which had seemed to hot for sunshine and paddling earlier in the day. As the sky darkened and I put in a tack to the East to keep clear of the wide stretch of shallow water to the West and eventually passed the entrance to the River Crouch channel, 6 miles out to sea. As I sailed through the shallower water of the Wallet Spitway the waves became distinctly shorter and steeper, breaking over the foredeck and occasionally into the boat. However, soon after I was able to bear away to the North West and an hour and a half later was ashore at Brightlingsea.

I was tired after the 33 NM and 7 hour passage from Whitstable so was glad to see two DCA members, Geoff and Penny Darby, who’d turned out to greet me. Having someone to meet in a strange port after a long day is great for morale and local knowledge of things like where to store my boat safely and where accommodation may be found is invaluable. Geoff and Penny found me a corner in a boatyard where I could leave Stacey overnight, securely. My sister Mary and brother in law Jim, had also come to meet me and there were able to take me back to their home, not too far away, as all the B&B’s were fully booked up with wind farm construction workers and folk festival goers. So another comfortable and warm and dry bed, before setting off again the next day. After a meal at a South Indian restaurant in Brightlingsea I fell asleep after about 10 minutes in the car as Mary drove us home.

A few photos from a memorable day. 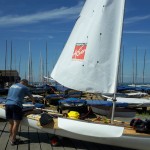 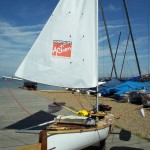 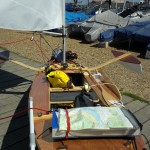 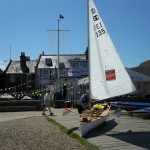 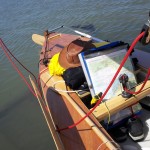 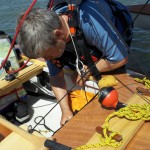 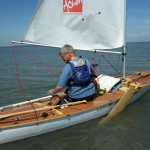 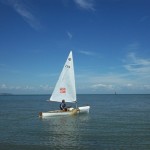 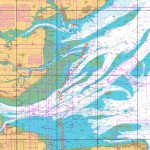 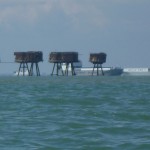