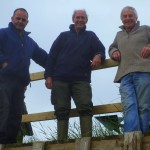 Stacey tied up at Wainfleet 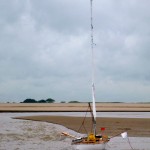 At the Entrance to Saltfleet Haven

I was woken from my slumber on the floor of the Skegness Yacht Club by the murmur of voices followed by the nasal roar of an outboard being briefly tested out of the water. John, Mike and Alex had returned at 5.00 am, as promised, to tow Alloa back into the haven. However, by the time I’d dressed and walked down to the creek in the grey morning they’d discovered Alloa had managed to return under her own power so they set off in the club dory to move a channel marker buoy instead. Later we drank coffee and talked of my sailing plans. The next section of coast had few places suitable for an overnight stop but with a good wind I might get as far as Bridlington over 60 nautical miles away but the fall-back option was Saltfleet Haven just South of the Humber Estuary and just over 20 NM from Wainfleet Haven.

We then set about reversing the whole process of getting me off the water. Bags were transported down to the creek, Stacey was pulled up the mud, I pulled on my dry suit, loaded bags on board, and then refitted the outriggers which had been removed to allow Stacey to be tied up alongside John’s yacht for the night. Locating my camera and replacing a broken leeboard retaining handle lead to delays so it was gone 8 before I waved goodbye to John, Mike and Alex standing on a wooden platform above me and set off down the creek. Paddling down the fast flowing creek against the wind proved far from easy. I hit the soft mud banks several times on the way down and on a couple of occasions had to jump out into the soft sticky mud to push off. I hoped no-one was watching my erratic progress. By the time I eventually sailed out to sea with a pool of muddy water sloshing around in the bottom of the boat it was gone 9. The day was dreek (a Scottish word which means like it sounds – grey miserable and wet) as I headed for Gibralter Point, and later broad-reached in a lightish breeze northward past the funfairs of Skegness and various towns, resorts and beaches of the Lincolnshire coast.

The idea of making Bridlington was ambitious and it was clear that my delayed departure and the lighter than forecast light wind would mean Bridlington was out of the question. Greg had been on the phone to Nick Vowles of the Dinghy Cruising Association, who’d said I’d be welcome to spend the night at Saltfleet and camp on the river bank. The entrance to the haven was another fairly long meandering channel which was only navigable near high tide. I arrived soon after low tide so I beached Stacey on the sand and waited for the water level to rise. Eventually, the incoming tide swept us upstream over the beach and into a straight section of the channel passing through marshland.

Billy Hill of Saltfleet Haven Boat Club was there to greet me as I arrived at a small slipway on the grassy bank of the small river. After I’d pitched the tent nearby, Nick Vowles came to visit with his daughter and told me a bit about his Tideway clinker sailing dinghy which he’s recently restored and plans to sail from Saltfleet Haven. After a meal of fish and chips kindly supplied by Nick (and deliberations about the next day over charts and, tide tables and pilot books) I turned for an early night, before an early start the next morning.

One thought on “Wainfleet Haven to Saltfleet Haven”