Having just reached Scotland, and looking back with a little distance of time and space between, it seems my time in Amble was a low point in my journey around the coast. I knew that long sails, challenging conditions, getting ashore and doing this solo* would be physically and mentally arduous but I didn’t reckon on two things. The first being the worst British summer anyone can remember and the second being the hefty demand of the ‘off the water’ workload. By this I mean; getting ashore, setting up camp, or finding somewhere to stay, making sure the boat is safe, planning the next day’s sail, domestic tasks, answering emails and blogging.

In addition to delays waiting for wind or waves to abate, the long run of exceptionally bad weather has often meant sailing solo in challenging conditions without any nearby safe havens. Physically, this has been hard work but mentally it’s been a whole lot tougher with some very difficult decisions concerning wind, weather and what’s an acceptable level of risk. Plus, there were some periods of very demanding sailing in large waves and or strong winds, or both, with a high level of vigilance needed to stay safe. Simply put, days of sailing in strong winds and into five foot waves, alone, was taking its toll. To add to my woes, my knee injury was increasingly painful and beginning to make walking difficult.

After a night’s rest on the floor of the Coquet Yacht Club floor, light winds would have allowed a Wednesday departure but a day’s to rest and allow injuries to recover seemed the better option. I occupied the time with updating the account of my voyage, reading and visiting the local supermarket for food supplies. On Thursday morning I prepared to leave but, looking seaward from Coquet Yacht Club, could see breakers at the harbour entrance so walked the half mile to the harbour pier to take a closer look. Large rollers from the North East were causing large breaking waves on the entrance. A departure was clearly not possible that day and I later heard that most of the local lobster boats had returned to harbour after finding the sea conditions too rough for comfort or safety. Talking to Greg confirmed that websites such as XC Weather and Magic Seaweed (a surfers’ website) were reporting a wave height of 4 to 5 feet, which was predicted to take a couple of days to die down. No doubt, the cause was some stronger winds far out sea, perhaps as far away as Norway. I’m learning that Northerly and Easterly North Sea winds often lead to such sea states which can persist for some time. In any normal summer this is unusual, but not this year. Landing on beaches was clearly impossible with large breakers and talking to one of the Coquet Yacht Club members who happened by, confirmed that all the harbours between Amble and Lindisfarne, some 22 nautical miles to the North, were open to the North or East. 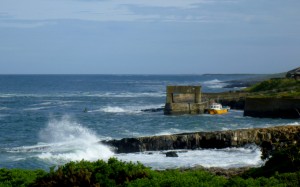 In the afternoon, deciding to make best use of time ashore waiting for the sea to calm down, I took a bus to Alnwick to collect a hire car which would enable me to drive up the coast to check out the sea conditions at harbour entrances, but also to revisit some of the places I new as a child. Craster’s tiny harbour looked calm enough but outside large white breakers surrounded, and occasionally invaded, the narrow rocky channel leading to the entrance. An angler on the end of the harbour pier assured me this was common in winter but was very rare in summer. A short walk into the small village yielded wonderful smells of the famous Craster kippers being smoked in a large two storey shed but sadly, nowhere to buy a hot kipper, toast and mug of tea. So I left to explore Beadnell beach and the river mouth at Alnmouth, both to the South. Neither seemed to present much in the way of safe havens in the prevailing sea conditions but Alnmouth was an attractive enough spot with a village next to the River Aln as it wound its way over the sandy beach. I watched anglers fishing for flatfish for a while before continuing back to Amble. A night in a B&B and comfortable bed helped ease some of the knee and back pain.

Next morning I continued my exploration of the coast with a visit to Seahouses which had become much busier and commercial since childhood visits with my grandmother. However, it was still recognisable and the harbour was much the same but the fishing boats had been largely replaced, or converted to day trip boats taking tourists and bird watchers to the Farne Islands. The roundabout where my grandmother used to take short cut up to the high street, against the flow of traffic, rather than go the longer right way round, was still there. So I took a photo for memory’s sake. 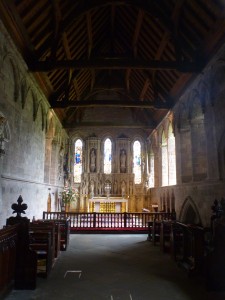 By contrast Bamburgh was hardly any different. This small village is dominated by the imposing castle, once the site of the home of the kings of Northumbria. A village green with tall trees is surrounded on both sides by rows of stone built houses leading down towards the castle standing on a high rocky outcrop near the sea. The stone fronted terraced stone house where my grandmother lived in later years looked much the same. At the western end of the village is the ancient church of St Aiden, first founded in 637 AD. Sitting for a while beautiful, calm and cool interior I looked at the tall illuminated window at the end of the nave while reflecting on times past and the present, on my boyhood and on revisiting the Northumbrian coast, on relatives no longer alive and on those close to me now. With a renewed determination to continue the journey formed in the peace of the church, I left to visit a nearby beach where I ate bread, cheese and tomatoes in the sun and took photos of rockpools where, earlier in life, I’d played with toy boats. After returning the hire car to Alnwick I took a taxi back to Amble where I dined on fish and chips at the harbour cafe. Later I checked the tides and weather forecast for the next day’s sail to Lindisfarne, via the Farne Islands.

* ‘Solo’ means solo at sea and not in company with any other boat, apart from when Ian Hylton or Keith Morris have sailed with me for a day or two. Greg has provided excellent shore based support from a distance and I doubt I’d be in Scotland now without being able to rely on Greg for up to the minute weather forecasts, assistance with researching destinations and for discussions of potential passage plans.