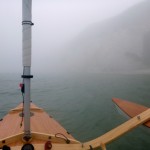 In Fog 30M from Flamborough Head 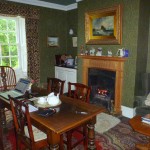 After the rigours of the previous three days I couldn’t resist a lazy morning relaxing in the sun with coffee, catching up on emails and blogging. I’d slept comfortably upstairs in the clubhouse on a large soft sofa. The large windows looked out over the bay and in the distance I could see Flamborough Head, my next headland hurdle before Filey, which I hoped to reach by the evening. The wind forecast was favourable and I planned to depart at 1 pm to catch the last of the north-going tide around the headland. This would avoid the possibility of a tidal race and breaking waves off the headland.

Ian and Rachel arrived at lunchtime to prepare for the sailing club barbeque that evening and I talked to another club member, Steve Smith, for a while. It turned out we’d probably met before when racing on J24 yachts and knew a few people in common. Steve had considered a sailing-dinghy circumnavigation of Britain, so was interested in the details of the sailing canoe and its ability to cope with the conditions of the past few weeks.

Ian towed Stacey across the wide expanse of sand to the sea, and Steve helped pull her into the water. I pushed off around 1.45 pm and in the very light wind immediately realised I’d left too late to catch the tide round the headland.

I started paddling and hoped for more wind. Heading along the beach to avoid the tide brought me close to the harbour entrance, where I tried sailing for a while and dropped a paddle overboard to shouts of ‘you’ve lost your oar, mister’ from the pier above me. However, I received a round of applause on managing to return under sail to grab the paddle. More wind eventually arrived and I tacked towards Flamborough Head. At the small bay on the south side of the headland (South Landing) I paused for a while, moored to an orange jerry can serving as a buoy, and called my brother in law, Jim, who was travelling from London with my nephew, David, to meet up with me for the evening. A woman in a black wetsuit watched me curiously for a while, after her swim.

A slight mist rolled in from the sea so I attached the navigation light to the top of the mast before setting off again, tacking into the light breeze. The sea mist steadily thickened and I was soon only just able to see the cliffs 30 metres to my left. Any further away and I was totally surrounded by thick fog with the eerie crash of unseen breakers against the cliffs close by. I briefly considered continuing, using the cliffs and sound of the waves crashing against them as a kind of hand rail, but this didn’t seem safe. Besides, I was just too darn scared to go much further! I retraced my route back to South Landing and managed to press gang an unsuspecting family out for a walk into helping to pull the boat up the very steep slipway.

I considered my options; camp at South Landing (OK, but not a great way to spend time with Jim and David), portage over Flamborough Head and carry on again on the other side (I’d be unlikely to arrive in Filey before midnight), or find somewhere to store Stacey and travel to Filey to the B&B booked by Jim.

Greg called, as he tends to do at difficult moments. “Do you remember the woman watching you earlier at South Landing? Well I’ve just been speaking to her. She has a B&B in the village of Flamborough, can store your boat overnight and her name is Lesley”.

How Greg does that I don’t know, but within an hour Jim and David had arrived, David had helped me pull Stacey to the Flamborough Manor, where we parked her in a walled garden. I arranged to return to the Manor to stay the following night with Katherine, who was arriving for the weekend, and Jim, David and I were on our way to Filey where beer and a curry were amongst our first priorities.

← Saltfleet Haven to Bridlington
Around Flamborough Head and on to Filey… →